I recently had a conversation with a psychiatrist about a long-standing problem I have with waking, in a state of panic, frequently drenched in sweat and having vividly unpleasant thoughts in my head. Sometimes the thoughts and sensations of the dream can take ages to clear. The psychiatrist’s take on it was amazingly fresh: perhaps this is a consequence of neurology and not of psychic disturbance. The dream may be evoked by the senses (a sound or a smell), or represent some attempt at rationalizing a sensory experience. This has implications for how to respond to sleep disturbance and distressing dreams.

Previously my psychiatrists have sometimes taken a psychotherapeutic approach that dreams are a path to insight, and dream interpretation leads to self-knowledge, self-understanding or self-awareness. Dreams, in this approach, relate to some “inner world” (http://www.pcicollege.ie/why-should-therapists-know-how-to-work-with-dreams). In Freudian dream analysis, dreams are contrasted with a waking conscious that censors disturbing thoughts and memories. Dreams bypass the censor, exposing conflict and trauma that requires interpretation and resolution. At other times they have taken a pharmaceutical approach, prescribing anti-anxiety and sleep medication to minimise distressing dreams (with terrible consequences in terms of tiredness and poor concentration, because medicated sleep is not restful sleep).

At one point, I received some counseling that was based around interpreting my notes of dreams, exposing “the truth” about my childhood traumas and allowing the traumas to resolve. This was some of the most destructive therapy I have encountered. At the same time, it is important not to dismiss dream content outright and to note that a neurological and a psychic explanation can co-exist. A high state of sensory arousal makes the recall of emotionally-loaded dreams or trauma more likely, and the dream, memory or trauma also has some significance. The fresh insight is to view the waking as a problem with more than one potential solution.

(For an idea of the nature of the problem, for me, here is a brief outline: In December I woke between 2am and 5am on 25 out of 31 nights. On several of those nights I felt it necessary to get out of bed and check that all the doors were locked, that no intruder was in the house and that nothing was broken. Some nights I wake up because I hear glass smashing or with the sensation that I am covered in blood, which I can feel and smell for up to an hour after waking. Sometimes I don’t dare go back to sleep and I have to find a radio station with calm spoken voices to convince myself that the world is safe.)

For an example of how neurology and psyche might collaborate to produce a conscious recollection of a distressing dream, imagine taking a DVD of Star Wars: A New Hope (1977) and playing it from 1 hour and 27 minutes in. In this scene, Darth Vader strikes down Obi-Wan Kenobi whilst his friends watch helplessly. No matter how many times you have scene the film, or how familiar you are with the story, you probably need that hour and half of story to ramp up the emotional arousal to the point that the scene carries all of its intensity. (You can try it by watching this scene in isolation at https://www.youtube.com/watch?v=8kpHK4YIwY4). The power of Obi-Wan Kenobi’s line, “You can’t win, Darth. If you strike me down I shall become more powerful than you can possibly imagine”, is probably diminished by not watching the film from the beginning.

However, our minds seem quite capable of storing both sensory memories and emotional states in a form that can be instantly recalled, so we can suddenly snap from one emotional state into another as if we have just re-experienced all the events that lead up to the image. This process appears to be so rapid that we can enter a dream state that had an unfeasibly long sequence of events almost immediately after falling asleep. It is also probable that we can consciously recall, in an instant, a dream narrative that attempts to rationalise an emotional state. That conscious recall might not represent the dream content at all. I have had dreams of being in a car on a long journey that ends in a crash, and leapt out of bed to see a (real) car still rocking on its springs on the road outside – the accident is real, the dream recalled with its emotional content after the driver applied the brakes, and fully formed by the time the car hit a wall.

A highly aroused nervous state is therefore not the cause of the dream, but one factor that leads to more sensory awareness and more conscious recall of dream-fragments that correspond with those sensory experiences. For me, those sensory experiences – the smell of tobacco smoke or the sound of breaking glass – are so real that I can not tell if they are false (hence the search for broken glass or intruders).

Shinseungback Kimyonghun is a Seoul based artist group consisting of Shin Seung Back and Kim Yong Hun who blend the technology of perception with artistic production. One recurring theme is algorithms used to identify faces. This is beautifully illustrated in “Cloudface”, in which the kind of technology that a point-and-shoot camera uses to identify and focus on human faces is pointed instead at clouds. The camera algorithm repeatedly finds “faces” that we humans can identify with. http://ssbkyh.com/works/cloud_face/

They also wondered what a character’s prototypical face would look like if subsequent frames of a moving film were captured and overlaid in a composite portrait http://ssbkyh.com/works/portrait/ – reminiscent of Francis Galton’s misguided efforts to identify the physiognomy of the archetypal Jewish, homosexual, sick or criminal person (http://cabinetmagazine.org/issues/15/fleming2.php).

If thoughts and dreams (conceptions) arise in part from the cries of an aroused sensory system (perceptions), these are probably experiences that many others share. Many people see cloudfaces, cloud animals, interesting imagery or feelings like flight and falling that may arise from some sensory component. Some people might run away and other people might embrace the opportunity for experience, knowing it is (physically, at least) safe to encourage the conceptions. 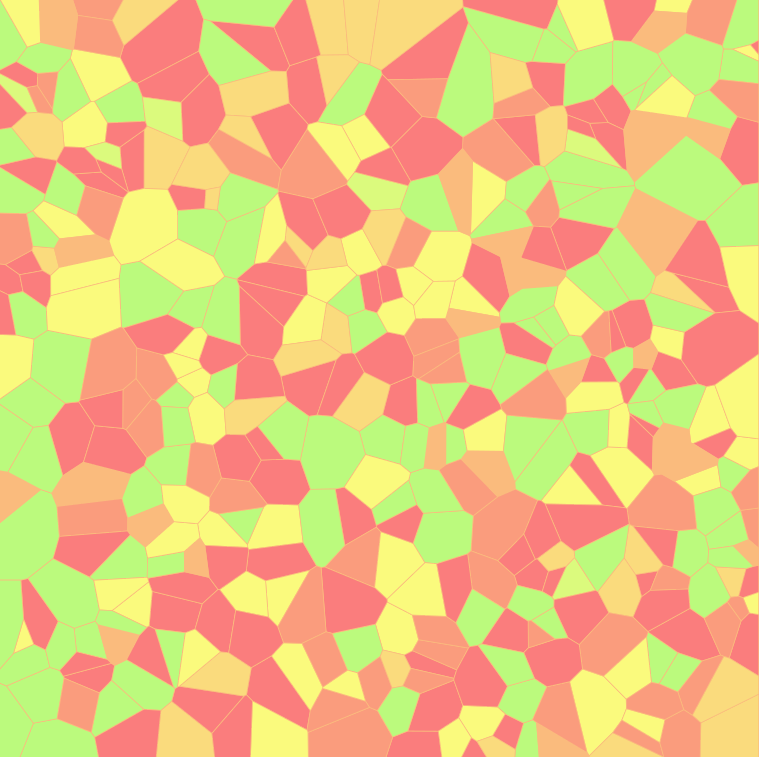 One simple experiment here is to imagine looking at complete darkness, with a neurological system that struggles to see something, anything, especially threats. If the visual system is stimulated by some random photons, or randomly-excited nerves, it will probably attempt to amplify and make sense out of those random stimuli – like a camera in darkness ramping up the gain and displaying noise as speckles of light and dark. Attempting to shape these with boundaries might look something like the image here. 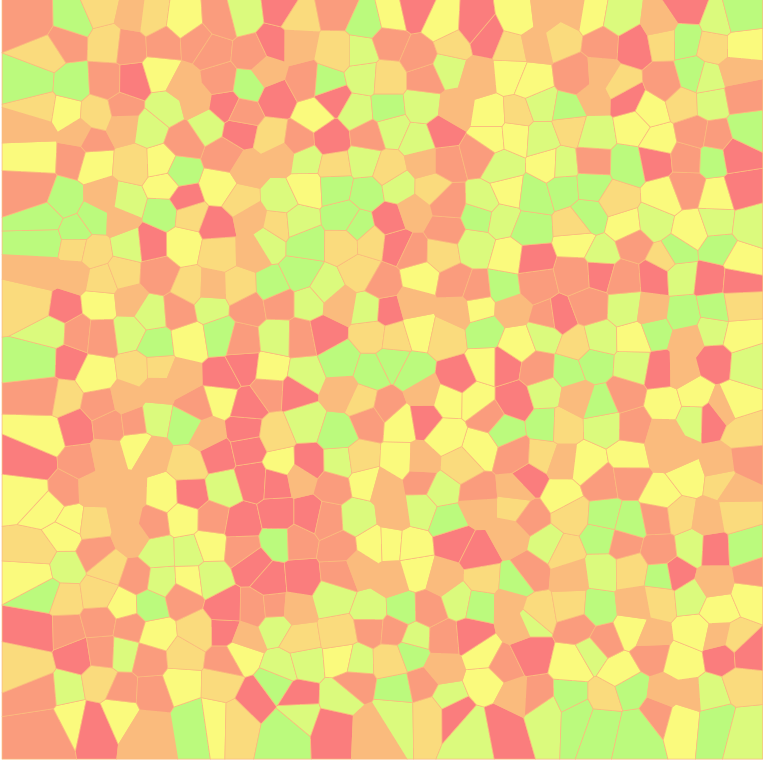 If the nervous impulses are somewhat evenly-distributed (like real retina cells and nerve cells), then that even distribution might also play into forming images without perception. 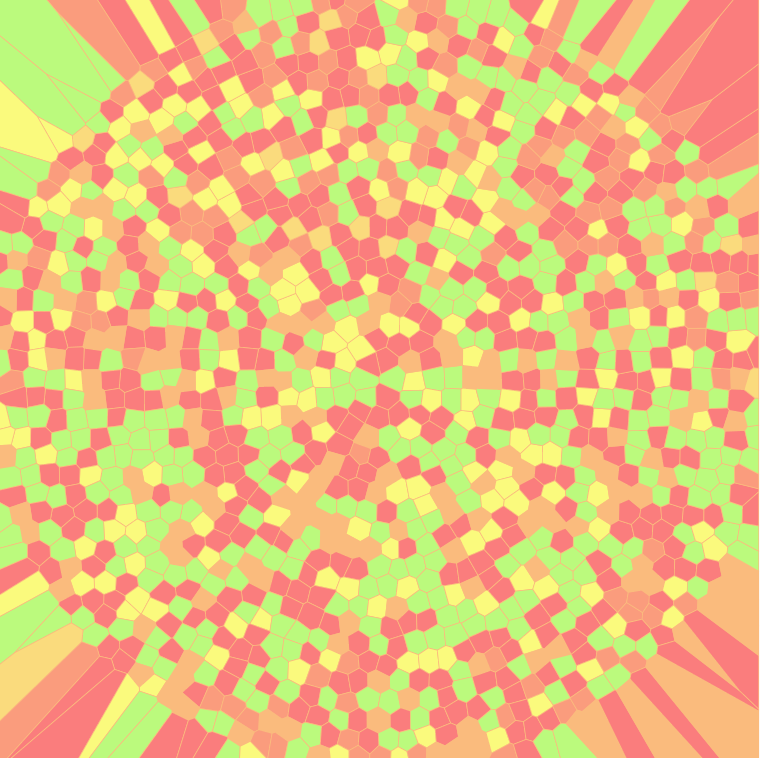 If sight is reasonably symmetrical and radial, like our eyes, then a pattern similar to this might be formed – the shapes are like the images I see if I squeeze my eyes shut, or look into the utterly dark interior of a cave or unlit room. I have picked colours similar to the colours I see. (For true nerds, the shapes are a Voronoi tesselation of the 2-dimensional space occupied by radially-distributed x- and y-terms, coloured with a random number. The colour is additionally modified by high-pass filtering, to detect edges, maximising the opportunity for identifiable features – you might see faces in the shapes, if you are inclined to). 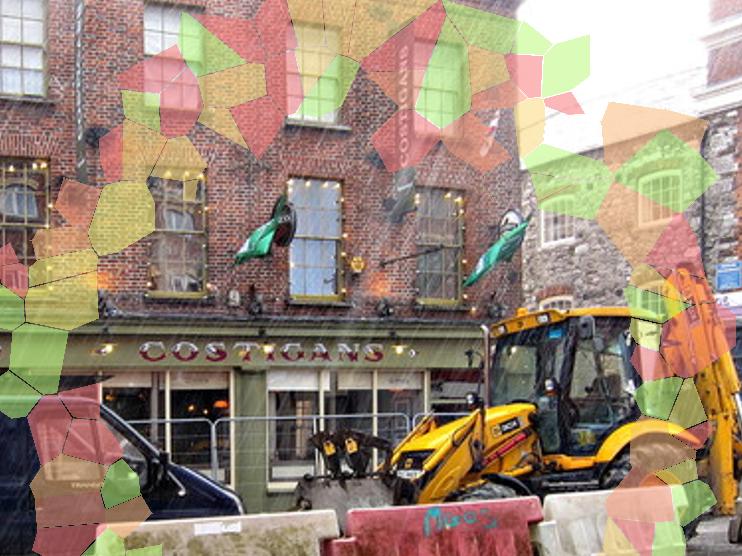 (Incidentally “migraine with aura” might share some properties – these are images that people have drawn of the experience of visual disturbances during migraine https://www.google.ie/search?q=migraine+with+aura&biw=960&bih=873&source=lnms&tbm=isch – the image above is my own experimental shapes overlaid on a photograph of the street).

There are some possible implications of the psychiatrist’s suggestion. One is that the choice of medication and relaxation therapy should be towards managing feelings and anxiety during waking hours, not using medication to stay asleep. Greater relaxation is likely to lead to less negative emotions in the states that sensory experiences arouse – so if there is a noise, smell or texture that causes wakefulness, it is less likely to be associated with distress.

A second is that medication for sleep is unlikely to be useful alone, because some people have a sensitive neurology that responds to quieter noises and less intrusive sensory experiences. Trying to drug these away is neither effective nor beneficial – it is much better to learn how to manage the experience. One simple outcome, even in the short time since hearing this possible explanation, is an immediate reduction in distressing content – a credible rational explanation is all that the mind was generating, and now it has one.

Finally, attempting to interpret the dream content is a separate issue. It contain meaningful reflections of psychic issues such as wish-fulfillment, unspoken fears and unresolved trauma, but it is not necessary to interpret these in order to reduce distress. Approaching the sensory issues may be quite enough to get a good night’s sleep.

1 thought on “An Interpretation of Dreams and Nightmares”