You can contact me through Twitter @StuartDNeilson, LinkedIn LinkedIn or email to this site feedback at stuartneilson dot com.

I was diagnosed with Asperger syndrome in 2009 at the age of 45, after many years of ineffective psychiatric treatment. I have been teaching and researching at third level since 1987. I lectured in statistics at Brunel University for eight years, where I was also director of medical information systems in the Centre for the Study of Health, Sickness and Disablement. I have also lectured in medical statistics, have been involved in a variety of research projects and have published extensively in international neurological journals. I have co-authored a number of books including guides to multiple sclerosis, motor neuron disease and Asperger syndrome / autism My first degree is in computer science and I have a doctorate in mathematical modelling of inherent susceptibility to fatal disease as well as a diploma in disability studies. 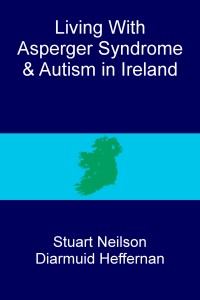 Myself and Diarmuid Heffernan have written a book on “Living with Asperger syndrome and autism in Ireland”, which is available as a print and electronic book through Amazon. The book was launched by Deirdre O’Shaughnessy in November 2013 in the Thomas Davidson room, The Central Library, 57-61 Grand Parade, Cork.

My most recent book is a resurrection of a school project written in 1979-1980 on the Painted Lorries of Pakistan.

November 2013: Paul Cudmore, Catherine Krause and Stuart Neilson presented “Perceptions of the Barriers in Accessing Cognitive Impairment Services” at the Meanings of Madness; Critical and Creative Perspectives conference at UCC.

July 2013: The Certificate in Autism Spectrum Studies profiled by Claire Droney in the Irish Examiner, “On the Spectrum”.

June 2013: “The spooky powers of normal people” presentation as a video slide-show.

June 2013: Stuart Neilson has been involved in the development of the new Certificate in Autism Spectrum Studies to be delivered by the Centre for Continuing Adult Education at University College Cork. He will also lecture on the course when it commences in Autumn of 2013. He spoke briefly at the launch by John Buttimer, Lord Mayor, which is available as a video podcast.

May 2013: Stuart Neilson was recently featured in an Irish Times article, “Living by numbers” by Colette Sheridan on Wed, May 29, 2013.

5 thoughts on “About me”