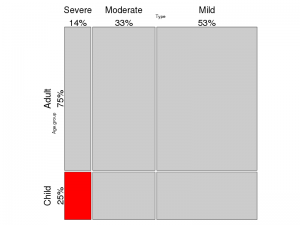 END_OF_DOCUMENT_TOKEN_TO_BE_REPLACED

The direct cost of admissions due to autism as a primary diagnosis was €205,000 per year, with an indirect cost (including secondary diagnoses) of €5.6 million per year. These cost estimates are also rising at 26% per annum with increasing recognition of autism as a diagnosis. Economic cost estimates can not be causatively linked with autism, but may form a context in which to evaluate interventions that reduce hospital admission rates or increase quality of life for people with autism.