For anyone who wants access to the data files used to generate the images below, they are in CSV text format – it should open in any spreadsheet, statistics package or wordprocessor. The full reference (author, title and publication) is included in each row, along with keyword counts. The files are:

“The narrative use of autism … for the most part … constructs narrative meanings that reinforce the concerns of a non-autistic majority audience. … We now know too much about, say, cholesterol … But writers can still turn to autism when they’re looking for an ailment that can drive a plot.”
— Murray, 2006

Media representations both reflect a reality and shape perceptions about autism, although journalism differs from the most available images of autism in films, television, novels and other fiction – journalism, in principle, should reflect observed factual representations. Other sources of ‘factual’ representation include documentaries, biographies, autobiographies and other non-fiction literature. Printed news has advantages over radio and television news current affairs and other factual reporting in that the content is visible to all (text) and readily processed for content analysis. Subtitles and transcripts of radio or television material would require rigorous methods to ensure consistent, transparent analysis.

“literature both reflects and shapes societal attitudes to people in this vulnerable minority group. People with intellectual disabilities are seldom able to determine, confirm or counter narratives about themselves. This situation, in which the subject is fundamentally unable to participate in their representation, raises unique ethical considerations.”
— Iyer, 2007

Barnes (1992) describes media portrayals falling into a number of harmful stereotypes, including The Disabled Person as Pitiable and Pathetic, an Object of Violence, Sinister and Evil, Atmosphere or Curio, Super Cripple, an Object of Ridicule, Their Own Worst and Only Enemy, Burden, Sexually Abnormal, Incapable of Participating Fully in Community Life and Normal. Think of Eddie Redmayne, Tom Hanks, Dustin Hoffman or other major actors whose Oscar or other notable success has been through one or more of these stereotypes.

Articles ‘about’ autism for this analysis are any articles returned by the search engine (Proquest) with the keywords ‘autism’, ‘autistic’ or ‘Asperger’, which returns all articles containing those exact words or containing phrases with those keywords and any articles tagged with those terms. This may include articles that are not strictly ‘about’ autism and only include the word (e.g. ‘autistic’ as a political insult, or in a side-comment about family credit). The search is unlikely to exclude articles of interest.

The Irish titles were the Irish Examiner and the Irish Times; the UK papers were the Daily Mail, the Sun and the Times; and for contrast I included two (US) science magazines, Nature and the American Scientist. 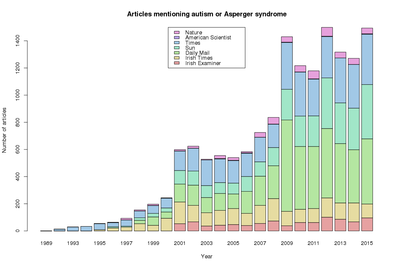 An epidemic of information about autism — but where from, and how trustworthy?

The majority of publicly-available ‘factual’ printed information about autism comes from newspapers. These factual sources, combined with fictional representations (in film, television drama, comedy and novels) are the source of images of autistic people for anyone who is not personally affected by autism. There were 15,298 articles about autism and Asperger syndrome in the 7 sources. There was just 1 article in 1989, less than 100 articles per year until 1998 and rising to almost 1,500 articles per year by 2015. These were 925 articles in the Irish Examiner and 2,048 in the Irish Times; 4,790 articles in the Daily Mail, 2,947 in the Sun and 4,015 in the Times; and 31 in the American Scientist and 542 in Nature. The publications appear in this sequence (from bottom to top), in the same colour in all of the graphs here.

Rather than reading, evaluating and then identifying themes in these 15,000 printed articles, I used a process of repeatable automatic theme identification – it is not 100% reliable (“parent” may refer to the parent of an autistic person, or an autistic person as parent), but good enough to evaluate time trends and to compare theme frequencies between titles. A theme is identified by the presence of specific words, e.g. ‘victim’ (or ‘burden’) is identified in any article containing the words burden, tragedy, suffer, afflict, helpless and victim, or variants of those words. The sensitivity and specificity of themes are variable. The themes here are:

Most frequent words in Irish and UK newspapers 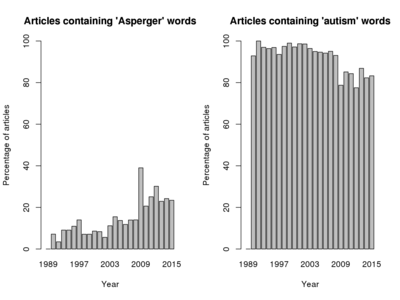 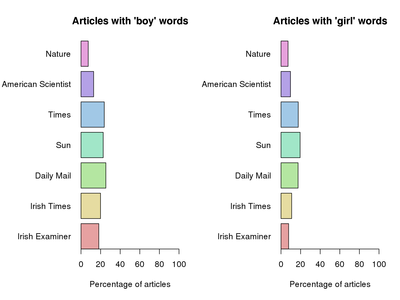 Boys (22.6%) are mentioned more often than girls (16%), consistent with the scientific and public perceptions of autism as a male condition. 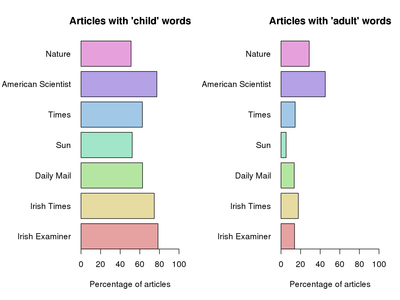 Missing voices: “The voice of the individual with autism is largely silenced, and predominantly, the focus is on third-person accounts of autism. News stories generally stem from the perspectives of parents, academics, health professionals and journalists, rather than from individuals with an autism diagnosis. Moreover, adults with an autism diagnosis are rarely referred to, and autism is presented as a condition affecting children. As a consequence, autism appears to be infantilised. For example, when Richard & Judy (2005, p.20) recount their interview with 26-year-old Daniel Tammet in The Express, he is referred to as the ‘Boy with a rare gift of genius’. Although this reference to ‘boy’ appears in the title of a television documentary featuring Daniel (‘The Boy with the Incredible Brain’), this incongruity is not corrected (although Wollsaton (2005, p. 22) writing in The Guardian highlights that he is ‘not really a boy at all’).”
— Huws and Jones, 2010

“Autistic people are largely silenced unless they are autistic savants with special talents.”
— Bie and Tang, 2015 p.884 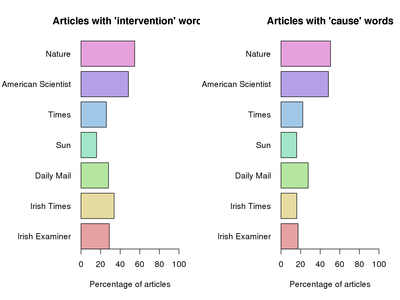 Intervention (26.9%) and cause (22.6%), particularly in scientific sources, which tended to concentrate more on intervention and scientific discovery. The Daily Mail stands out as having a (sensationalist) interest in ‘cure’ – entirely consistent with their “things that cause cancer” presentation of scientific and medical topics. 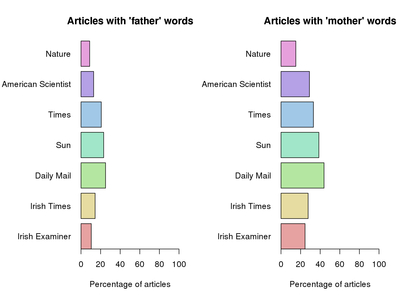 “In the general interest magazines, autism is encapsulated in stereotypical discourses valuing science, numbers, genetic and other biological research, and objectivity. In the magazines for women, autism is described as a tragedy, usually identified first by heartbroken mothers who then go on to “move heaven and earth” to fight for their child and “normality”. Neither magazine focuses on the perspective of the person diagnosed with autism nor reflects the debates about whether or not ASD is necessarily a problem or just a difference.”
— Clarke, 2012 p.182 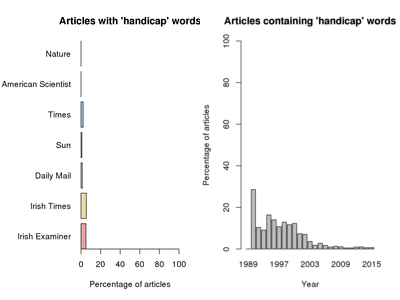 Outdated words like ‘handicap’ (2.2%) are declining, but the trend is slow and Irish publications have persisted with outdated pejorative language for longer than the UK and US sources. 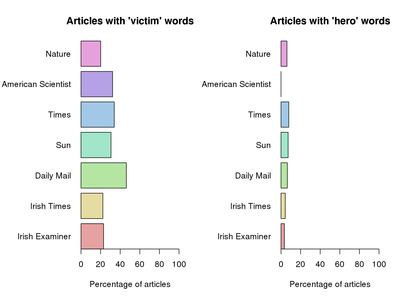 “Discourses about autism present it as an affliction of suffering, and people are referred to as being victims of this condition”
— Huws and Jones, 2010

A headline in The Telegraph, 13 January 2016, read “Sir Ernest Shackleton suffered from a hole in the heart” and contained the explanation that “The authors believe that the explorer [Shackleton] knew he had something wrong with his heart because he avoided being examined by doctors who might have prevented him going to Antarctica.” This conveys the impression that Shackleton did not ‘suffer’ from the medical impairment and more from the restrictions that he perceived medics from imposing on his adventures.

“Mellon also noticed that individuals with disabilities, particularly those with physical limitations, were cast in two distinct roles. Portrayed as either the poor little thing or the brave little soul, Mellon saw these two types of characterizations in most of the books she reviewed and concluded that these broad stereotypes often cast children with physical disabilities in a negative light and inaccurately neglected the tremendous differences that exist within any group of children.”
— Ayala, 2010 p.106

Andrew Wakefield and the MMR controversy

“In the wake of the now settled MMR controversy and attempts to link the vaccine with autism, there has been widening interest in whether autism has increased in incidence over the last two decades.”
— Leask et al, 2005 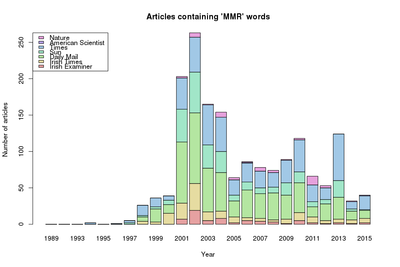 References to MMR peaked in 2002 (263 articles), in the year following Andrew Wakefied’s resignation from the Royal Free Hospital, but continue to the present day (40 articles in 2015). Wakefield’s paper was retracted by The Lancet in 2004, with a small peak in articles when he was struck of the medical register in 2010 (118 articles) and another (124 articles) following critical comment on his documentary (Harrison, JA. (2013) Wrong About Vaccine Safety: A Review of Andrew Wakefield’s “Callous Disregard”. The Open Vaccine Journal, 2013, 6, pp. 9-25.)

Summary: Autism is seens as a disorder, of a child, in the context of a parent (the mother) and as a victim: 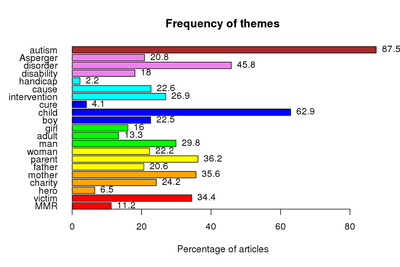 “One of the most important findings from this review was of the relatively limited amount of helpful information (such as on appropriate educational resources and balanced reporting on the debates). There were many neglected opportunities to provide readers with information that could increase their understanding of the multidimensionality of life for individuals labelled as having autism or on the negative effects that diagnosis has on the hopes of parents and carers (Hodge 2005).”
— Jones and Harwood, p15

The Portrayal of Disabled People in the Media

Barnes (1992 p.21) made concrete policy suggestions on portrayal including:

These concrete suggestions, 25 years on, remain useful guidance to anyone considering writing about autism, or anyone considering involvement as a contributor to a news item. For instance, is the person with autism interviewed and presented as a complete, complex human being?

2 thoughts on “Autism in print news”