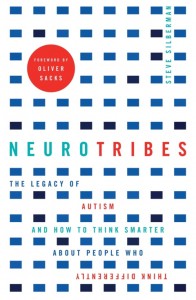 This is an important book and, above all, a book of the now — some commentators have talked about the creation of a “pre-Neurotribes” and a “post-Neurotribes” public understanding of autism, which is probably correct. The amalgamation of Asperger syndrome into autism spectrum disorder within the DSM-5 in 2013 rewrote the definition of autism and Steve Silberman delineates the new landscape of the autistic spectrum and its population.

[Edits and additions in square brackets]

Neurotribes is definitely a publishing phenomenon and has been accompanied by a vast number of gushing, enthusiastic and uncritical reviews [in the mainstream press]. I think uncritical appraisals serve the reader and the author badly — Neurotribes is a war-cry, a demand for recognition, and a work of advocacy written in a narrative style. It expresses opinions and perspectives that are (and should be) subjective, but not in a form that would appear in a textbook. This is not a criticism of the author or book, but of the expectations raised by over-enthusiastic reviewers. There is certainly potential to publish a “post-Neurotribes” edition of Neurotribes, in a shorter, less polemical and more factual form, with a bibliography. (You can find the bibliography on Steve Silberman’s website). My comments below are from the perspective of my involvement with delivering Autism Studies at University College Cork, and how students might relate to the text.

For a summary of his perspectives you can watch Steve Silberman’s Ted talk (14 minutes), which is accompanied by an interactive typed transcript.

First off, [the most important reviews for me are those by the] many people affected by autism who have written reviews. [They include general and specific criticisms, but] collectively present a positive appraisal:

Now my own thoughts:

The gushing, enthusiastic and uncritical [mainstream] reception to Neurotribes has raised expectations that this is THE autism and neurodiversity book. I recommend it, but with the warning that it is the subjective work of a journalist and it is not designed as a reference work or a textbook. (In fact, I found an eBook copy a helpful companion to the print volume, to search for quotes I remembered and could no locate again). A shorter summary or a second edition may become my de facto recommendation, if it is more factually-oriented, contains less of the personal interest back-stories and is structured in a consistent chronology. (Tyler Cowen makes similar points in a review of Neurotribes, by Steve Silberman, including “oddly, for all its praise of autism and autistic ways of thinking, the style of the book is remarkably non-autistic.”).

[I wish that Steve Silberman had been more sympathetic to people involved in anti-vaccine and biomedical cure groups. This is not because I agree with them (they know I don’t agree), but because they are every bit as deserving of respect as anyone else affected by autism. I recommend a thinly fictionalised novel called “The Autism War” by Louis Conte (associated with Age of Autism and legal challenges to the National Vaccine Injury Compensation Court) for anyone who wants to understand the autism wars from the anti-vaccine perspective.] 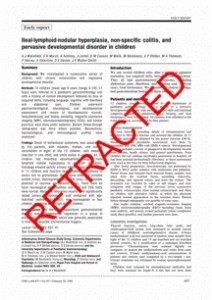 Steve Silberman has a talent for humanising the history and personalities of autism, which sustains interest through more than 500 pages – the book is gripping and not an exhausting historical work. It is also (necessarily) partisan, selective and subjective. The human-interest narrative also jumps between epochs and occasionally reorders events for narrative impact, which disrupts the timeline of history. (He also omits Andrew Wakefield’s patent application [and the behaviour of others in the research group, of which he was not the leader]). The time reversal is most disruptive in the description of events surrounding Andrew Wakefield’s discredited research and his professional misconduct hearing, which maximises the impact of his behaviour at the expense of clarity.

Neurotribes also rehabilitates the image of Hans Asperger and demonises Leo Kanner. It is great journalism, but not great history. Both men (compared to most people) exhibited depths of compassion and dedication, in combination with personal flaws. Neurotribes dwells on Asperger’s qualities and Kanner’s faults, again at the expense of accuracy. Steve Silerman alludes to “rumours of Nazi membership” without putting them to bed — in fact he raises a further spector that Asperger claimed his “little professors could aid in the war effort” in order to save them from extermination. (Asperger’s 1938 paper praises the Third Reich and thanks Adolf Hitler, a document that really should be seen in its entirety and in context to appreciate Asperger’s tenuous position). [A forthcoming book in English, “In Different Key” by John Donvan and Caren Zucker, will address these claims, already published in German as “Hans Asperger and the ‘child euthanasia’ in Vienna – connections” by Herwig Czech in the book “Auf den Spuren Hans Aspergers” by Arnold Pollak. Czech’s views can also be found in “Hans Asperger – part of the apparatus” and “Medicine in the Twilight”]

This leads to the most serious criticism of Neurotribes, expressed eloquently by Simon Baron-Cohen in “Did Hans Asperger save children from the Nazis — or sell them out?” in the Spectator — that Steve Silberman inadvertatntly perpetuates exceptionalism. Neurodiverse people should be treasured for their humanity, not for their special skills or abilities. Most autistic people do not have special skills. The average intelligence of autistic people is below the population average; indeed the average on ANY treasurable skill is most likely below average. It is problematic to suggest that any group of people should be treasured for their exceptional abilities (or the exceptional abilities conferred by their genes, when expressed to a lesser extreme), rather than their humanity.

The contribution of Jewish people throughout the history of autism is astounding and a revelation that Steve Silberman draws out exceptionally well. Equally, the mass migration of Austrian and East European culture into America, and its adaptation and assimilation into American culture, is an incredible achievement. Steve Silberman touches on the exclusion of black people from the history and current recognition of autism, which is a subject worthy of greater exposure.

Steve Silberman has done an incredible job of researching and assembling a cohesive narrative of the history of autism, which is essential reading.

On a tangent, I wonder if anyone would support the crowd-funding of a library of the history of autism, with a Creative Commons license? Many of the materials and references in the book are inaccessible to the public. Despite the time, money and energy required to access these materials, they probably have little or no residual commercial value to the publishers. A library of documents, photographs and video could support a new generation of autism teachers, parents and professionals.