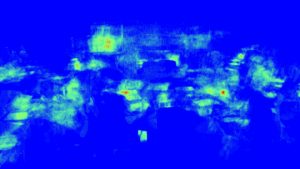 I have been making some images recently that attempt to capture, for me, the ‘feel’ of an event or action. Photographers talk about “the decisive moment”, the title of Henri Cartier-Bresson‘s most famous book (although the French title is actually “Images on the Sly”). I am thinking more of “the decisive motion” – what event, movement or attention-grabbing object fills the frame in memory? I have been taking short sequences of video and creating a single image from all of the frames, to locate images that capture my sense of memory.

The best of these include motion heatmaps, images coloured by the amount of movement in each pixel. In a classroom this should be a map of the things that matter (the teacher, friends, intentional moving images), rather than distractions (fidgeting, wafting posters and reflections). The image above shows areas of high motion (red) and stillness (blue) in a classroom.

I took a sample of classroom footage from a California school Beginner Teacher Support & Assessment training film at https://www.youtube.com/watch?v=HuyjdGoSHXc, cutting a segment in which the camera was stationary. 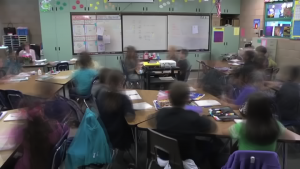 If we take a video of a classroom, using a camera in a fixed location, most of the room will stay mostly the same from beginning to end. Taking the average of all frames in the video blurs out the moving objects, just like a long-exposure photograph of the room. People and things in motion disappear. Static objects remain clear. People who move a little will appear, although in a haze that covers their range of motion. This image can be used as a baseline model of stillness.

The eye and mental attention are naturally drawn to anything that moves (or changes in sound, or smell), so we can now map the visual attention demands of the video sequence. Anything different from the baseline model is movement.

Here an evenly-spaced sequence of frames (every fifth of a second) is compared to the model and only the different pixels are kept. This image is a composite of “everything that moved”. These differences are pasted in time order, overlaying previous changes – so if something moved repeatedly, the latest position is shown.

The teacher (at the top) moves from left to right against the whiteboard, which also has an animated Microsoft Windows screensaver logo flashing in different positions. A flag blows in the breeze and posters on the right-hand wall are reflective, sparkling as people move. The pupils occupy the foreground – some of the pupils move a great deal more than others.

If we measure the total change in each pixel over time, and then colour this from blue (for pixels that do not change at all) through yellow and orange, to red (for pixels that change the most), it creates a colour map (shown above) of the “hottest” and “coolest” parts of the visual field. Place the camera where a pupil sits and it indicates where their eye will be drawn. 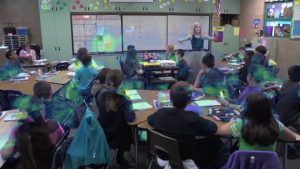 Laying the motion heatmap over the original video shows which elements of the classroom are in motion (click the image, or https://vimeo.com/277630413). Notice the bright red hotspots where a number of pupils are waggling a 12″ white ruler, or re-arrange pens on their white workbook. One pupil’s feet move continuously under the desk and another is visible through a large hole in the back of the chair. The area on the bottom left is a reflective desk surface, so every movement of the pupil in front of it is magnified with a high intensity of light change. The loosely pinned pages on the whiteboard (can anyone read them from their desks?!) also create a hotspot of motion. 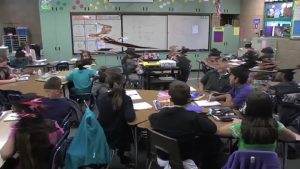 Slit-camera images are also interesting records of motion, usually used to record the sequence that competitors finish a race. Applied to the video, I scan from the top of the first frame, filling the image one line at a time, to the bottom at the end of the video. The teacher’s motion in front of the whiteboard becomes a diagonally stretched image. A number of pupils (bottom left and top right, for example) are zig-zags of motion, and a number sat very still.

My own experience of classrooms, both as pupil and teacher, is that the distractions are as demanding as the subject, often more so. The eye is drawn to motion, dragging attention with it. Some people seem to be good at regulating their attention, ignoring things that “don’t matter” and focusing on things that do. My mind appears not to be able to make the same distinctions – distractions always matter. Part of this is autism and attention deficit (ADD, attention deficit disorder, is part of my autistic experience – without the hyperactivity, but that might just be my age), and part might be anxiety and hyper-vigilance to potential threats. Every change, of course, is a potential threat until it has been processed, recognised, and filed away as safe. This all takes a great deal of effort.

Sometimes, especially when I am working alone and with my own selection of music, I can get into a groove of absolute, joyous focus. If things are going well I can stay focused and productive for hours, even through the night, without noticing the need to eat. It is not healthy and regulation downwards is as important as regulation upwards.

Looking at the still images here, and watching the video, there seems to be so much that could be altered to improve the experience of being in class. If you have to put up a poster then fix all four corners, and make sure it is matte and not reflective. Switch off projectors and other machinery that is not in use. Use non-reflective surfaces and neutral colours. Screen pupils from each other (e.g. full chair backs and desk fronts) or invite distractable pupils to select comfortably quiet zones.

You could easily replicate this heatmap with any video of a classroom, workplace, public venue or shopping area. I have not tried it, but stereo audio recordings could be displayed as aural distraction maps of spaces. There is probably a technology to record aroma exposure, or some chemical proxy of aroma. Tactile sensations and touch (perhaps even proximity measured from video) could reveal another world of sensory experience.

Clever classrooms (And offices! And shops! And cafés!)

Peter Barret and his team have shared some great work on modifying the sensory demands of classroom spaces to improve teaching outcomes. The report and other materials offer great advice on practical changes to a shared space. Have a look at the reports, papers and suggestions on https://www.cleverclassroomsdesign.co.uk/.

The same advice could equally apply to a workplace, a shop or a café, to create an inclusive environment in which people with sensory sensitivity are comfortable. The reduction in sensory demand makes the space more comfortable for most people, so these adaptions do not have negative consequences for others. There are many people in addition to autistic people who benefit from calmer environments – for example people with anxiety, mental illness or in emotional distress.

There is a strong business motivation to overcome, sometimes called “the Gruen transfer”, after an unfortunate architect who sought the exact opposite of the effect named for him. It is strongly believed that confusion, disorientation and distraction will destroy shoppers’ planned purchasing and drive them into buying on impulse, buying more and buying faster. Noise, aroma, visual distraction and lack of sightlines are common features of public commercial spaces. Cafés now reverse their kitchens into the eatery – all the ovens, coffee grinders and steam machines in the diner’s face. With no escape, a lost plan and surrounded by chaos, the consumer is thought to find comfort in making a decision – any decision – to buy something. Confuse them enough and they will buy another, even if they don’t need it.

Somewhere within a commercial world dominated by chaos, there must be profit in creating calming spaces and soothing places to sit and eat. Schools have less excuse for some of the chaotic distractions in class.