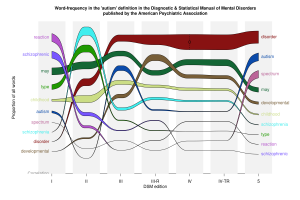 There are 7 editions of the Diagnostic and Statistical Manual of Mental Disorders from 1952 to 2013 – revisions I, II, III, III Revised, IV, IV Text Revision and 5. I extracted the autism definition and any paragraphs discussing autism from the full text for every revision of the DSM, then used software to count the frequency of every word. Excluding common words (and, the, etc.), frequent words in a document indicate the document’s content. Looking at frequent words such as ‘disorder’ or ‘retardation’ is one method of summarising the perspectives of the professionals who produced the text of the DSM and, by extension, the psychiatric profession as a whole. Plotting the frequency of words of interest, as a proportion of all words in each edition, plots the ebb and flow of the concepts underpinning the definition of autism.

The image below is an alluvial (river) plot of the most frequent 10 terms in the autism definition across all 7 revisions of the DSM. Concepts of autism as schizophrenic and particularly a schizophrenic reaction have been almost entirely replace by the autism spectrum and childhood development.

This plot of the first 10 terms is a window into a much larger analysis of (potentially) all the words defining autism in the DSM, and the history of psychiatry that influenced DSM committee decisions on each revision.

There is a social process that continuously taints words associated with stigma, so idiot and imbecile gave way to retarded, then mentally handicapped, intellectually impaired and special need. Each word has its window of acceptable use, then falls out of favour for some new, untainted term to describe the same group. Stigma is (literally) marking out, which is what diagnostic labelling is designed to do. We are therefore on a never-ending journey of imagining new language to describe old concepts. The DSM is no exception, so retarded and handicapped have been acceptable, along with disturbance, manifestation and similar terms that are no longer acceptable. Steven Pinker calls this perpetual renewal of terminology the “euphemism treadmill”. According to Pinker “The euphemism treadmill shows that concepts, not words, are primary in people’s minds. Give a concept a new name, and the name becomes colored by the concept; the concept does not become freshened by the name, at least not for long. Names for minorities will continue to change as long as people have negative attitudes toward them. We will know that we have achieved mutual respect when the names stay put.” (The Blank Slate, 2002).

Concepts of psychophysiologic, psychoneurotic, reactive and other psychogenic disease have almost disappeared. Psychotic, neurotic and schizophrenic were in the top 100 terms in 1952. Psychopathy (a term once used for autism, ‘childhood psychopathy”) and psychopathic have gone and psychopathology is used with great care – primarily due to wider (mis)use in everyday language, in thrillers and in films like “Psycho”. Brain and physiology are no longer driving factors in the cause of disease, replaced by genetic and neurodevelopmental etiology of disorders or conditions. The use of syndrome has switched from co-occurring symptoms to a condition with a single or narrow causative factor.

An interesting reversal is the use of the adjective autistic in preference to the noun autism (e.g. with autism, or in autism). These two words have changed position between revisions, but contrary to wider social movements to adopt identity-first language. The frequency of autistic greatly exceeded the frequency autism in the DSM-IV and DSM-IV-TR. However the DSM-5 in 2013 adopted “autism spectrum disorder” as the preferred term and consequently prefers the noun in most contexts, rather than autistic. This is likely to be a factor in professionals’ dislike of identity first language and insistence on person first terms such as “child with autism”.

A diversion into Stieg Larsson

Having spent some time looking at the DSM, I thought the development of language in the Millenium Trilogy by Stieg Larsson would be an entertaining aside. It is also a useful test that the visualisation methods work on a variety of materials, and I am not (consciously or unconsciously) producing the output I expect. This visualization therefore uses identical processing of the series of texts.  My favourite role model for autism is Lisbeth Salander, someone who has the bravery and drive to achieve her objectives, combined with impairments that she successfully lives with. Not everyone agrees that the character is autistic, a diagnosis given in the third person (by three other characters) because she refuses to submit to psychiatric assessment.

The ownership of the Millenium franchise was disputed because Stieg Larsson was not legally married to Eva Gabrielsson, his partner of 30 years. Larsson’s estranged father and brother wrested control of copyright from her after his death and appointed sports biographer David Lagercrantz to continue the series. Opinions differ on how successfully his two books continue the story.

In Stieg Larsson’s Trilogy, Bomkvist and Salander are the two principal terms, with the Vanger family (the plot of The Girl with the Dragon Tattoo) high in the first book. Overall, in the first 1,000 terms, Larsson’s language is consistent with a correlation of 0.57 (between the first and second) and 0.60 (between the second and third). Kendall’s tau represents the probability that any pair of different words are ranked in the same order in both books.

The visual impression of an untidy transition from Larsson to Lagercrantz is confirmed by a correlation of just 0.29 in word frequencies – their writing styles are not alike. More significantly, my heroic Lisbeth Salander is in the shadows of other (all male) characters in Lagercrantz’s The Girl in the Spider’s Web and behind Leo Mannheimer  in The Girl who Takes an Eye for an Eye. The switch from past to present tense in the titles of the continuations is used within the text. Stieg Larsson’s wonderfully impartial, journalistic, clunky observations are lost (with Salander) in favour of a more racy, breatless thriller style of writing. Salander’s character as an autistic person with a complex identity is also absent, with a sop in the form of an “autistic boy” who contributed little in the way of outlook and characterisation.

My interest in the DSM (and Stieg Larsson’s Lisbeth Salandar) is an interest in autism as an identity, and how versions of the identity are created and policed by others, or expressed and validated by autistic people. I have some much larger versions of these images (with many words of interest, and other information overlaid) which I would love to exhibit in a physical space, along with images I have made from other sources.

Anyone interested in an exhibition and talks on autism, with multiple autistic speakers?