Fictional films and books about autism

What do people write about when they are writing about “autism”?

People often write “about” autism, using it as a plot device or to add depth to a (usually another) character. Occasionally people write about autism as a lived experience. Only rarely is the lived experience portrayed in film or by actors with autism.

(For a more detailed discussion see Hacking (2010) “Autism Fiction: A Mirror of an Internet Decade”)

98 Autism-related feature films from 1963 to the present 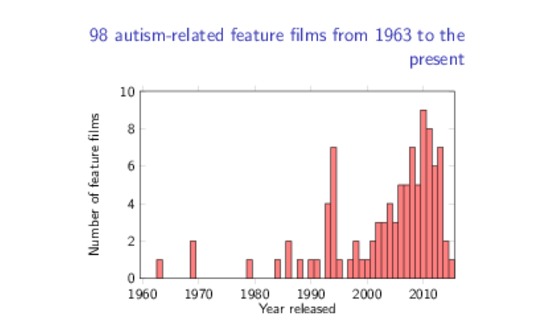 Feature films have a pivotal role in forming public perception of what ‘autism’ means, and in educating psychiatrists, first responders (police, paramedics and frontline staff). I w as surprised not just by the sheer number of feature films ‘about’ autism, but also by how many films preceded “Rain Man” (1988), which is often seen as the turning point in autism films.

The list here deliberately includes any film that people believe to be ‘about autism’ (whether I agree or not), because these beliefs are the public perception that defines what ‘autism’ is.

Autism-related feature films – the first “autism film” is probably one of these: 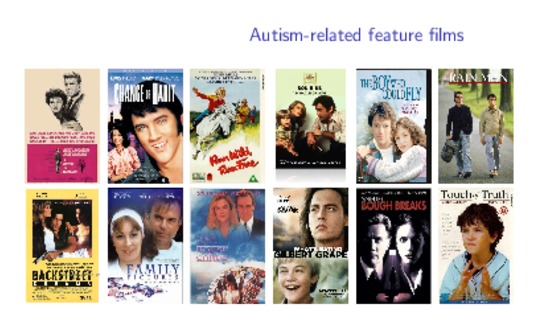 (It is important to note that films are used to educate psychiatrists, which has a very real effect on mental health services if those films are inaccurate or stereotypical – for instance Dave & Tandon (2011) “Cinemeducation in psychiatry” includes “Box 1: Useful films for teaching psychiatry – Rainman (1988), Autism” and continues “Rainman (1988), starring Dustin Hoffman and Tom Cruise, is an Oscar-winning film. Hoffman won the award for his sensitive portrayal of autistic savant Raymond Babbitt, based on the real-life story of Bill Sackter, a friend of Barry Morrow, the director of the film. The film can be used to stimulate discussion on a variety of topics, including diagnostic criteria of autism‐spectrum disorders, impact on carers and the role of institutional care, but is also excellent to demonstrate the range of verbal and motor tics and mannerisms displayed by Babbitt (0:36:30–0:38:24). Alexander’s (2004a) suggestion of playing a clip without the audio and then with sound to aid the understanding of non‐verbal communication is particularly relevant here.”)

A Bechdel Test for autism-related fiction

The Bechdel Test is named after the American cartoonist Alison Bechdel who, in 1985, had a character in her comic strip “Dykes to Watch Out For” voice the idea. (http://en.wikipedia.org/wiki/Bechdel_test). The Bechdel Test requires a work of fiction to feature:

The Bechdel Test is a quick method of determining if films or fiction speak for women, or merely incorporate them as a plot device. A Bechdel Test for autism would require (on the basis of the films listed above):

Characters with autism are often portrayed as the children of the leading actors, providing emotional crises and opportunities for the adults to express their character. The films, in the main, are not driven by the wishes of the character with autism and do not portray life with autism from their perspective. They are certainly not made by people with a diagnosis and do not employ actors with a diagnosis. 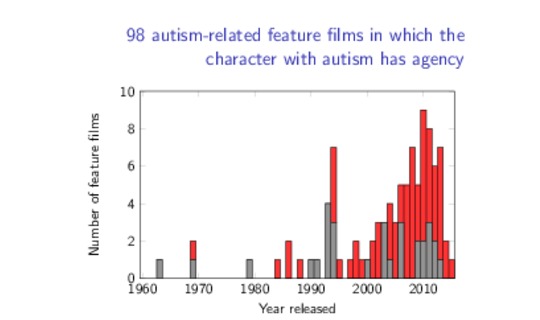 (“Dustbin Baby” is a BBC made-for-television adaptation of Jacqueline Wilson’s 2001 novel of the same name. Lizzy Clark was the first actress with Asperger syndrome to portray a fictional character with the condition. “Midwinter Night’s Dream” is an allegory of the Balkan wars, starring an autistic child, Jovana Mitic, as the main character.)

The sheer volume of books ‘about autism’ is phenomenal. I used publicly-created lists from several online sources, such as Goodreads.com, where two or more people agreed that a book was autism-related. 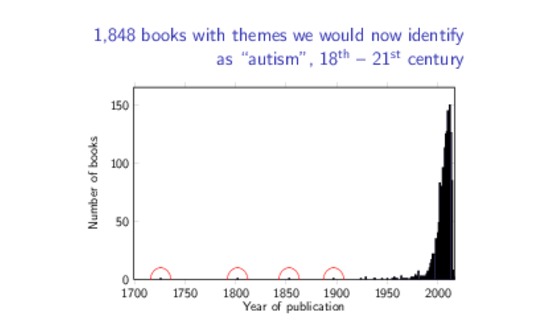 The first “autism book” is possibly one of these: (unless you prefer Shakespeare, or Homer, or …) 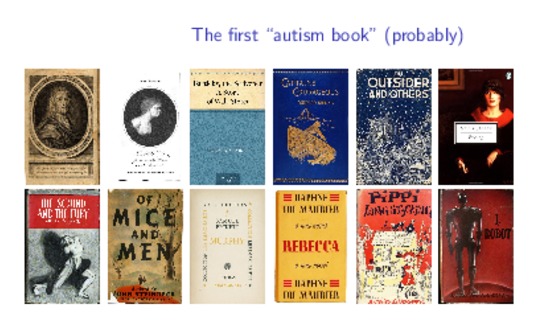 We see Jonathan Swift as well as Jean Marc Gaspard Itard’s “Victor, the Wild Boy of Aveyron”, Herman Melville and Rudyard Kipling. And again, it is up to us as individuals to decide what it means to write “about autism”, and each of us will have different answers.

(Paul Cefalu (2013) examines William Shakespeare’s Iago, in Othello, through the lens of Theory of Mind. Kristina Chew (2013) discusses the νήπιοι (young men) in Homer’s Iliad (c. 8th century BCE) through the lens of neurodiversity, comparing them with the πολύτροπος (much-travelled) Odysseus).

Jonathan Swift was reacting to the inhumane treatment of mentally ill people in his time. When he died (aged 80, in 1745) he left the bulk of his estate (£12,000) to found St Patrick’s Hospital for Imbeciles, now St Patrick’s University Hospital.

He wrote about the Yahoos, a beast of burden with human appearance, “Here we entered, and I saw three of those detestable creatures, which I first met after my landing, feeding upon roots, and the flesh of some animals, which I afterwards found to be that of asses and dogs, and now and then a cow, dead by accident or disease. They were all tied by the neck with strong withes fastened to a beam; they held their food between the claws of their fore feet, and tore it with their teeth.”

He also described the people of Laputa, “it seems the minds of these people are so taken up with intense speculations, that they neither can speak, nor attend to the discourses of others, without being roused by some external taction upon the organs of speech and hearing; … [a] flapper is likewise employed diligently to attend his master in his walks, and upon occasion to give him a soft flap on his eyes; because he is always so wrapped up in cogitation, that he is in manifest danger of falling down every precipice”.

In “It Cannot Rain But It Pours, Or, London Strewed With Rarities” he described the real-life “wonderful Wild Man that was nursed in the woods of Germany by a wild beast, hunted and taken in toils & how he behaveth himself like a dumb creature, and is a Christian like one of us, being called Peter; and how he was brought to court all in green, to the great astonishment of the quality and gentry”. People asked if Peter did not speak, did he have a soul? Compare Swift’s use of “a Christian like one of us” with “un cretien sommes nous” (a cretin), used in Valais and Savoie, where the frequency of thyroid-related intellectual disability (cretinism) was high due to iodine deficiency. People were urged to treat their children as “cretien”, Christian or human, even if they did not have speech. 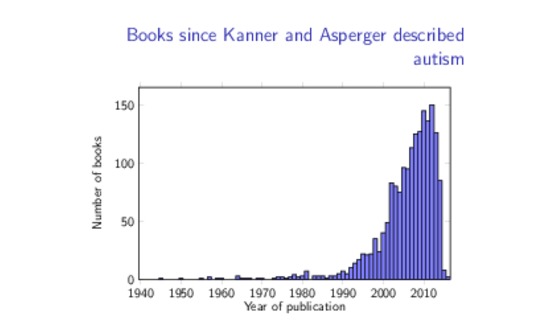 I know of only two published English-language fiction titles about autism, written by people with a diagnosis of autism

Sometimes fiction (whatever the author’s intention) can be used to express aspects of autism well, whether or not it was written by someone who has a diagnosis. Many of the great writers have considered and written about conditions or states of mind that are like autism. What matters is whether they speak to us – or for us.

The character Murphy (who does not walk or wander, but “receded a little way into the north”) finds himself incapacitated by indecision and limited by rigid thinking in eating his lunch, a packet of 5 biscuits. These are “the same as always, a Ginger, an Osborne, a Digestive, a Petit Beurre and one anonymous”, yet his rigid need to save his favourite (the Ginger) until last and to dispose of the anonymous first leaves him only six permutations of eating the remining three biscuits. He will therefore repeat an identical lunch at least once a week. 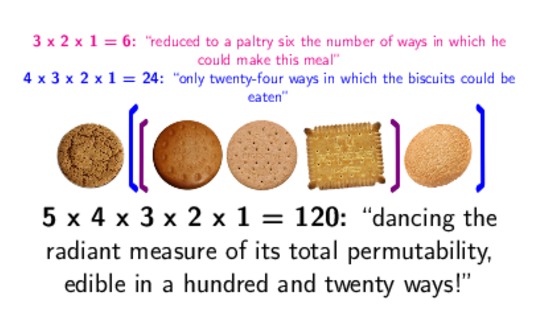 He expresses this problem beautifully in mathematical form:

This little vignette captures perfectly my own incapacity when faced with unwanted or unexpected choice in food, or attempts to eat in public places.

It is a long march before people with autism control public perceptions about themselves, taking part in the direction and production of films or writing fiction about the lived experience of autism. We can all take our own first steps in choosing and promoting whatever film and fiction works for ourselves, as individuals, in explaining how we perceive our own lives. Some films or fiction may have little or nothing to do with autism per se, but may still function as a tool to advocate for specific issues that affect an individual life or specific problem.

Take ownership and share your experiences through film and fiction, driving the public percpetion of what “autism” is towards characters and situations that are realistic to you.

1 thought on “Autism in fictional and factual film and books”