I had never been aware of “curry sauce” until moving to Ireland, but recently tried recreating it from fresh ingredients at home, as requested by my teenager. Curry sauce is part of a tradition of taking the alluringly exotic aspects of foreign foods and repackaging them into a form that is safely not too Other. A full-blown aloo gobi and chapatis would be excessive, but curry sauce on chips is a comforting kind of daring. Similar recipes include Coronation Chicken, a blend of curry powder, cream, chicken and raisins that can be spread in a bread sandwich. Coronation Chicken was itself based on the even less threatening Jubilee Chicken, a blend of mayonnaise and hints of ingredients from all over the British Empire. (Bananas, papayas, raisins, coconuts, limes and all kinds of “foreign” are frequently thrown on or into completely inappropriate recipes, all “foreign” being much the same thing). 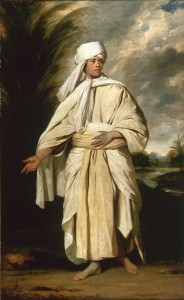 When Mai was one of the first Society Islanders to visit Europe in 1768, the young Ra’iatean man was styled “Prince Omai” and widely admired in European Society. The artist Joshua Reynolds painted a portrait of Mai, dressed in something more familiarly Oriental, a comforting degree of strange that fell far short of Paul Gauguins later portraits of young Society Islanders. A cross between an Arabian prince and one of the three wise, this Prince Omai was enough of a step towards acknowledging and respecting this new Other.

I raise this watching the cute and super-cuddly version of autism portrayed by Joe in “The A Word” (BBC One), which follows a tradition of sanitising autism for a non-autistic audience. Fiction is obviously intended for a largely (99%) non-autistic and presumably autism also acts in part (hopefully less than 99%) as a metaphor for non-autistic issues. Sometimes autism stands in for family tension, or marital breakdown or even (in “Midwinter Night’s Dream”) the breakdown of an entire society and nation states. Very rarely is autism just autism. Many representations of “autism” blend in all kinds of intellectual disability, mental illness and eccentricity as a seasoning of Special, just like foreign foods are sprinkled with the Other of dried coconut, papaya and banana. I like “The A Word” and find the discussions and issues raised in the programme interesting, sensitive and well-managed. The portrayal of autism, however, is a poor one because it is too audience-friendly. The writer has said “it would be unethical to cast a child who really was on the autism spectrum” in the role (http://www.theartsdesk.com/tv/peter-bowker-making-word), but I certainly think an autistic child would have been more convincing – and that the writer and crew would have handled issues differently if they worked with an autistic actor on set.

Some examples of unrealistic portrayal are the breakfast meltdown in which Joe politely tips (dry) rice crispies on the floor, the ease with which a song restores his calm, his switches between fluent and echolalic speech, and the sly looks at mum Alison to check that his meltdowns are affecting her. They may well reflect some aspects of autistic behaviour, or even a real or blended person, but they don’t strike me as authentically autism. Above all, I can’t seen any behaviour at all that is threatening or that would send me looking for a diagnosis – as his sister Rebecca keeps repeating, Joe doesn’t need to be different. A diagnosis is a route to therapy and intervention for people who are not achieving their capacities or ambitions, not a badge to excuse difference.

Episode 4 presents a particularly difficult issue of “a real Joe, hidden inside his autism” and this illustrates exatly why I do like the series. This is a very real scenario, just like the parental bereavement of discovering that Joe is autistic, scenarios that are raised in real families every day. Rebecca is right: the real Joe inside is the Joe you see on the outside, but each parent has to learn this hard lesson for themselves – and some never stop looking. Fiction is important to make stories we can relate to in our own lives.

Curry sauce, if you have a hankering for a little bit of Other, is easy to make at home and should keep for a week or so in the fridge. I used equal portions of finely chopped onion and apple, with a few grated garlic cloves, all simmered in butter until softened. Add a good seasoning of curry powder and flour, beat in some stock until a creamy consistency and serve on chips. (I used Bolsts’s curry powder and tritamyl flour). You could purée the sauce, but I forced it through a sieve with the back of a wooden spoon, which is silky-smooth and doesn’t have the gritty texture of machined purée. Don’t do this with your autistic relatives.

1 thought on “Autism and curry sauce”