I have not posted anything in a while, because of a lot of internal strife and withdrawal from the world. Anxiety is hard to write about, because it often has no words – and because alexithymic people especially have trouble in identifying and describing feelings. Actions are easy: throughout a four-week period in February I left my house on just four occasions, because my activity tracking wrist-band and phone calendar tell me so. All four were appointments to lecture or with the wonderful people at Aspect (http://corkautism.ie/aspect/) who support me. 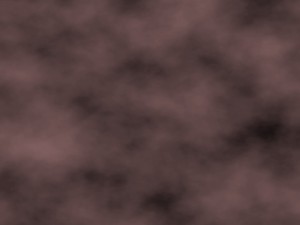 Anxiety for me is a mixture of disembodied, amorphous negative feelings and almost random razor-sharp images that have tenuous connections to the present. There are bodily symptoms of feeling my heart throbbing, vision darkening, light-headedness, sweating and difficulty processing sound and words. These occasionally lead to panic, which is embarrassing. Anxiety is also very common, one of the most frequent forms of mental ill-health – Dr Ben Green is quoted as writing “The persistent nature of anxiety disorder over time, with its childhood antecedents and often recurrent prognosis, means that it may dominate sufferers’ lives. Only chronic heart disease produces more disability” (http://www.anxietycare.org.uk/docs/brief.asp). The two diagnoses I have had are generalized anxiety disorder (GAD) and panic disorder. Both are (much!) more frequent in people with an autism diagnosis than people without.

Like the weight of the ‘black dog’ in depression, anxiety is a cloud of discomfort that is everywhere, but hard to catch hold (or even clear sight) of. Fear of something that you perceive (with senses, as an external object) is usually easier to deal with than fear of something you conceive (with your mind, as a memory or anticipation). You can cross the road to avoid groups of drunk people, but your memory or fear of a beating cross the road with you.

Chronic anxiety, meaning anxiety that stays high over time, leads to depression and other mental ill-health. Raised anxiety also means hyper-vigilance, or paranoia, and the fear that people are looking at or talking about you, or that ‘something’ might happen.

As the quote above says, the “childhood antecedents and often recurrent prognosis”, mean little pieces of the past sometimes come hurtling into the present, blending bits of memory and childhood fears with the reality of sights, sounds or aromas of the present. For me the odour of a particular brand of cigarette, smoked decades ago by someone who terrified me, will cause instant panic. That brand, thankfully, is either no longer made or simply unavailable where I live and work. (I remember the first time I saw a Hieronymous Bosch painting in a gallery, the details and overall imagery of heaven and hell – this hell  is final panel of The Garden of Earthly Delights.)

I have high verbal fluency, but even so I am unable to disentangle these little pieces of past and present in a coherent and meaningful way. The past or fears from the past seem so concrete that they must seem psychotic at times, because I am mixing perception and conception to the extent that reality is distorted. That terrifying individual (or the fear of the scary clown) might get projected onto the face, smell or posture of some hapless present-day person, who is then just as terrifying by association. And the Gardai, of course, I apologise for fearing anyone in a uniform, but especially men in black boots!

I wake up in the night sometimes soaked in sweat, heart racing, with nightmare images that are still in the room. It can take minutes, tens of minutes or even hours to dispel the feeling that those images are real and really going to harm me. My most common ‘feeling’ (and I’m bad at emotions) is a kind of ‘guilt / shame/ fear of arrest / fear of being mocked’ salad of emotions. The poor men in black boots, who are not to blame.

Right now my anxiety and lack of social engagement (according to my Garmin monitor, I have been out of the house 6 times in the past four weeks – a 50% improvement!) is associated with real-life stress, from lots of different things, so it is hard to identify which one is ‘the cause’.

About 70-80% of adults with autism have also experienced a mental health condition – anxiety, depression, real or misdiagnosed psychosis / schizophrenia, OCD or attention deficit are the most frequent. This puts autism in a strange limbo between disability and psychiatric services, when what it is most necessary is actually social support. In some service areas, an IQ of 70 is a strict determining factor – below 70 sends you into disability support and 70 or over sends you to psychiatric care, but only for the psychiatric issues. There is no support for autism throughout most of Ireland, unlike us lucky people in Cork and Kerry with Aspect.

There is a beautiful love song by Ian Dury and the Blockheads, “I could give her the respect she deserves / But I can’t cos I’m crippled with nerves”, about how nerves are more crippling than the physical impairment of post-polio – Ian Dury could not cross the dance hall to approach the girl he fancied because of anxiety so severe that “I’ll die cos I’m crippled with nerves” (https://www.youtube.com/watch?v=JBCpqq9nnok). 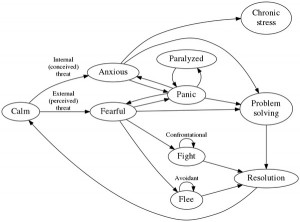 There are plenty of interventions for anxiety, social / generalized anxiety disorder and panic. First-line care (apart from medication) is CBT, Mindfulness, yoga and other exercises that build foundations for self-care in the moment. Reserves of calm, just like muscles, need regular exercise. Any calming technique like counting or breathing that has been practised when calm and safe builds a reserve of calm to be used when anxiety strikes. Little rituals can also help, as can big rituals, such as shopping in a particular order, or incorporating ‘safe’ activities like a church, library or gallery into going out.

I mapped out my own anxiety pathway as originating externally (fear of something I can perceive through sight, sound etc) or internally (anxiety over something I conceive in memory or dread). It is often possible to confront or avoid the real fear, by crossing the road or walking past the frightening scene – most likely you will survive, but it is resolved either way! It is also possible to mentally problem-solve – did this occur before? did it hurt? did I survive it? Robin Williams said “The things which we fear the most in life have already happened to us”.

Which leaves the dreaded conceptions, misconceptions and ill-defined clouds of anxiety. If they are not resolved, or don’t resolve themselves naturally, they build into crippling panic – fear paralysis – or chronic stress. Elements of conceived anxiety become interwoven with and overlaid on real life. Some unfortunate person becomes the clown who scared a little child, simply because he stands in a particular way or wears the same shade of trousers. There is nothing physical to confront or flee, no sound to filter out with ear-plugs and nothing to catch hold of. At its worst, you fight or flee from harmless real things because of the fearful overlays and interweavings.

Avoidance, especially social avoidance, is one of the simplest remedies for anxiety. But avoidance is also a huge cost – it is lost social support, lost opportunity, lost friendships and lost support network. Finding ways into a supportive community in the limbo of dual diagnosis is critical, but lacking for most people.

As I said at the start, this is hard to write. It is hard because it is one of my biggest failings. I have never been good at intervention and have never got better with anxiety. The best I can say is that it is no worse.